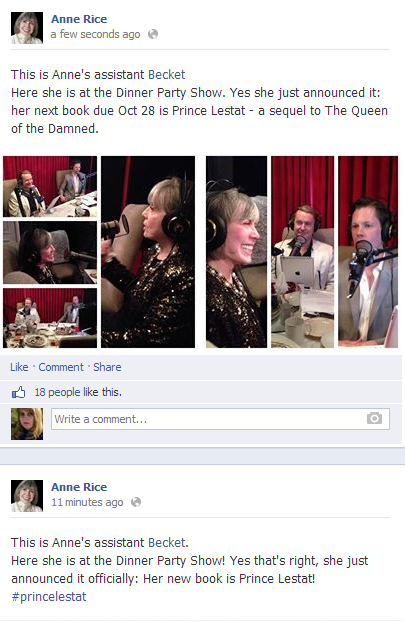 I wonder if it’s going to be set right after Queen of the Damned or ignore the ones that came after it and start over. Or, shall we say … revamp everything after QofD 😉

It’s supposed to be in between qotd and totbt, like a lost chapter or deleted scene. I  don’t think it’s rewriting the current Canon.

ooc; Anne’s said that it takes place in modern time, but is the “true” sequel to Queen of the Damned (which she later corrected to say “the first four books,” then “Memnoch”).  She said that the later books were more “memoirs,” although what she means by that, I think everyone’s still speculating.

I took her to mean that the other books post-MtD hadn’t advanced the plot, just gone back and filled in the blanks in the characters’ backstories, and that the new book would be something – well, new.

But then, she referred to the memoirs and, how did she put it, “the other experiments”? Which would mean the VC/Mayfair crossover, presumably. And for all its faults, the crossover DID at least advance the plot, in that Louis got powered up, Lestat finally woke up and she wrapped up the long-dangling Taltos plot thread (however much I really wish she hadn’t done it that way).

So maybe she just wants to do a new thing that’s pure vampire. I could live with that so long as the werewolves don’t get involved. I still haven’t been able to bring myself to read those books.