Lestat gets touchy when comes the sensitive subject of throat cutting.

Eat your heart out Dean…

As you may have gathered, guys that wear leather jackets are a major problem for me.

This is the vampire in leather to watch out for.

All I know of the synopsis for this are the bullet points gleaned by l-e-s-t-a-t (here) of the Dinner Party Show, and the teasing from Anne Rice as follows (source):

“It is a big vampire chronicle,” she said. “It’s all about Lestat and all about the vampires and what they’re doing right now. How they’re coming to terms with everything that’s happened to them, and how Lestat is dealing with demands from all sides that he step forward and become some sort of leader of the tribe.”

“It’s a true sequel to ‘The Queen of the Damned,’ ” Christopher prompted. “That’s how you described it to me.” …

“It’s a sequel to the first five,” Rice corrected, meaning that it also follows “The Tale of the Body Thief” and “Memnoch the Devil.”

“I don’t want to be irritating, or how should I put it, pretentious, talking about a character as though he’s a living being, but I really had to wrestle this guy to the ground and beat him up and say, ‘Look, you’ve got to talk to me. I want to know what you’ve been doing,’ ” she said. “I can’t really write novels about that character unless he wants to come through.”

Rice went back and re-read her own books in the series before she began writing. Once she hit her stride, she wrote more material than could fit into “Prince Lestat.”

“I feel like this is Novel 1 of a new incarnation of the Vampire Chronicles,” she said.

Fave line from this:  ”I really had to wrestle this guy to the ground and beat him up”

FANART OF THIS PLEASE.

A lovely Anon told me I could get the official synopsis FROM THE SAME PAGE I GOT THE COVER ART mon dieu… I feel silly. But here it is for you:

“The novel opens with the vampire world in crisis…vampires have been proliferating out of control; burnings have commenced all over the world, huge massacres similar to those carried out by Akasha in The Queen of the Damned... Old vampires, roused from slumber in the earth are doing the bidding of a Voice commanding that they indiscriminately burn vampire-mavericks in cities from Paris and Mumbai to Hong Kong, Kyoto, and San Francisco. As the novel moves from present-day New York and the West Coast to ancient Egypt, fourth century Carthage, 14th-century Rome, the Venice of the Renaissance, the worlds and beings of all the Vampire Chronicles–Louis de Pointe du Lac; the eternally young Armand, whose face is that of a Boticelli angel; Mekare and Maharet, Pandora and Flavius; David Talbot, vampire and ultimate fixer from the secret Talamasca; and Marius, the true Child of the Millennia; along with all the other new seductive, supernatural creatures–come together in this large, luxuriant, fiercely ambitious novel to ultimately rise up and seek out who–or what–the Voice is, and to discover the secret of what it desires and why…

And, at the book’s center, the seemingly absent, curiously missing hero-wanderer, the dazzling, dangerous rebel-outlaw–the great hope of the Undead, the dazzling Prince Lestat…”

Here’s what scares me “…along with all the other new seductive, supernatural creatures–come together…” 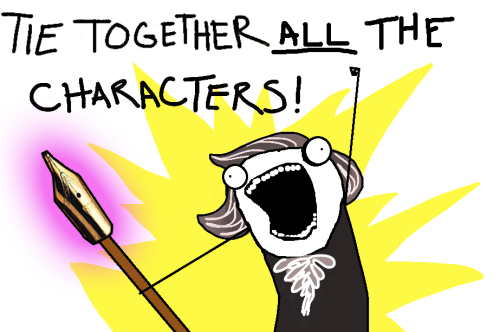