lestat (interview with the vampire) + costumes
(requested by iolauss) 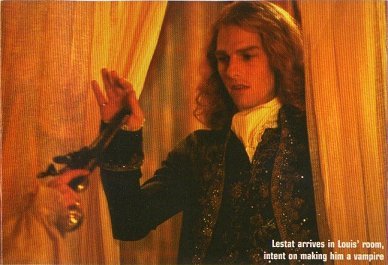 Interview with the Vampire: A deleted Scene!!

So in the original script there was an extended scene when Lestat enters Louis’s bedroom. Before the invitation, Louis threatens Lestat with not only a gun but also a sword.

where are these I wants deleted scenes zomg…

It might never have been shot in the first place, though I’ll bet there’s material shot that we never saw. It drives me crazy…

Such sad that it may never have been shot in the first place… and/or was  included with material we never saw… since AR wrote the script, I do think she wanted to keep as true to the characters as possible, I consider the script to be worth a read for this reason.

I found the scene, it was good, I can see why they didn’t include it, maybe to keep more mystery at that point… anyway, the script’s here, or you can check out a piece of this scene we’re talking about in my post here: