What a coincidence with a name like that… But what if he was “Daniel Armand MARIUS” omg… anyway… THIS IS HIM:

I DON’T THINK I CAN HATE HIM look at that exuberance!

I’m gonna redirect you to hyperbeeb, who is taking one for the team and reading the first one in the- has read the first one and is now reading the whole series?! Her tag for this journey into madness is #Mary reads the blood vivicanti

The blood Vivicanti is the name given to the vampires that aren’t vampires in the series. The blood Vivicanti are humans who have been infused with the blood of an alien. They possess superhuman senses and speed. A secondary good source for them is human blood which they consume via a proboscis protruding from their tongue which has a stinger at the end. The sting creates an orgasmic effect in its victims. For the blood Vivicanti, drinking of the blood allows them access to the memories and skills of their victims but only for a limited time (except of course in the case of our special snowflake protagonist whose photographic memory lets her retain skills forever).

The word Vivicanti itself was carefully chosen and created by Anne rice. It is a combination of two Latin words to make a new word.
From my best guess, it’s a mixture of the word vivi, meaning living or alive and canti which means a song so the literal translation of Vivicanti is living song.
So the blood living song. God, it’s blood canticle all over again.

^This was so informative thank u!

I’m gonna redirect you to hyperbeeb, who is taking one for the team and reading the first one in the- has read the first one and is now reading the whole series?! Her tag for this journey into madness is #Mary reads the blood vivicanti

Well, since the whole series (even IWTV, really) is based around Lestat and shit that happens bc of him doing the thing, we could make it his birthday which is November 7, 1760. We don’t have the exact date he was turned, but he was between 20-21 yrs old, and it was October, so we could say October 1.

The Anne Rice Vampire Lestat Fan Club has a ball for him (and the series) every year in NOLA on Halloween, but Halloween is already Halloween, we shouldn’t be greedy, trying to snatch it away from Halloween-lovers. Well, we could share… but anyway… I like the idea of the VC having it’s OWN day.

Could make it the anniversary of IWTV’s publishing. April 12, 1976.

Anyone want to propose dates?

like when does that even come up in conversation or discussion

WE NEED TO SEE LOUIS CAUTIOUSLY BITING SOMEONE

THANK U BB! I’M NOT WORTHY YES I AM

posting my lestat cosplay before the year ends!!

Wow incredible, god how cool would it be to be in New Orleans and turn the corner and they walk by — it would be amazing! Love all the detail, just beautiful. 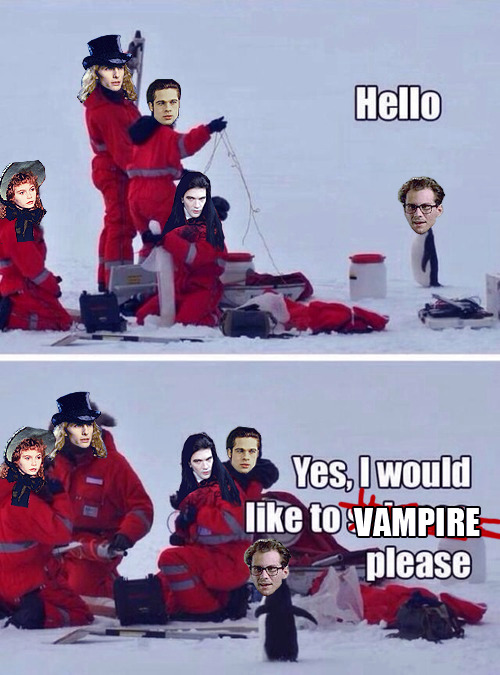 this will never not be relevant

I am dying. send halp/