Bonjour Michaela/@lixncourt~* Wishes received and appreciated, I wish you good health and happiness, too!

What an obscure question! I’m impressed. We see this silvery-black robe for like 20 seconds when he’s confronting Louis’ narration, “How did you wrong him? You said a name…”

That WAS a gorgeous silvery black robe, indeed. I’m guessing it was crushed velvet, you can see in the production stills below that it’s got “tracks” cut into it, so idk what fabric would do that, but it doesn’t look like a print to me.

@vinceaddams and @sanguinivora are costume ppl, they might know better what this is… I bet there were more scenes with Santiago in that robe, too, the full “trial” for Louis and Claudia under the theatre! but they were probably cut for time.

I also took a screenshot for you, and even though I tried to brighten it up, as it was a pretty dark scene, I don’t have the BluRay, it’s not the best quality 😛 Maybe someone has a better screencap.

First in my series of Vampire Chronicles playlists.

I think that’s definitely possible, in the context of the movie version of the story.* “[Lestat] knew me, he knew I would love her more than the waking world.” Very poetic *u*

Expecting a child doesn’t necessarily mean you love kids, BUT, Lestat could read minds, and perhaps he knew just how much being a father meant to Louis.  Louis doesn’t speak much of his own father, when he died, Louis had to take over the family business at a relatively young age, so maybe Louis was really looking forward to being a better and more loving a father than the one he had grown up with ;A;

PLUS, it seems like it would have been Louis’s first child, making him a father for the first time. I can’t imagine what that must feel like, expecting to have your wife back in your arms, and a new baby to love and raise, and then get neither back, knowing your wife died in pain?? ;A;

Even if Louis wasn’t a kid person, I mean, how can you not love a super cute 5 yr old angel like Claudia was originally? Scooped out of abject poverty and sickness, someone you could lavish with gifts and who would be grateful for it, having known only the barest no-frills of a life before? Lestat knew Louis would feel protective of her, she could be something to inspire him to learn to live again. You can experience the world anew with them as they learn about it ❤

*In the book version, it’s a younger brother that Louis had lost recently, Paul, a brother Louis was very close to. The death sends Louis spiraling into guilt and depression bc he feels responsible for it (and others, including his own family, blame him for it directly).

When Paul died, Louis says: “my mother told everyone in the parish that something horrible had happened in my room which I would not reveal; and even the police questioned me, on the word of my own mother.”

That feeling of blame in the situation is part of what made that loss so devastating to him, the death was preventable, if only he had had more patience with his brother ;A;

But with the loss of a child and wife in childbirth, I can imagine the husband feeling responsible for that, too. After all, if not for him, well, she wouldn’t have been pregnant (we’re assuming it was definitely his baby!) 😛 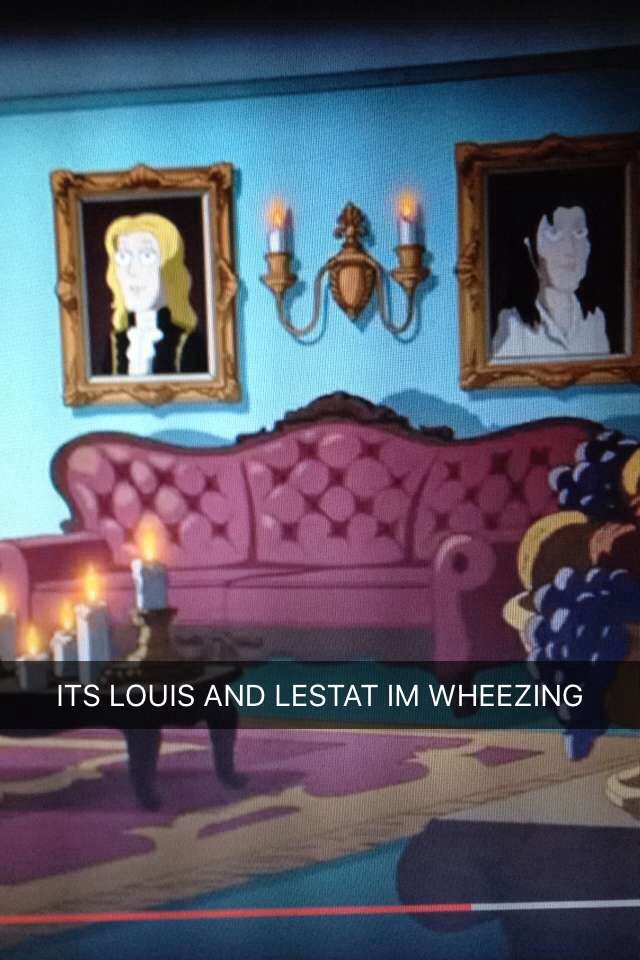 who wore it better:

You know, the first thing that comes to mind is that I would think that the Lestat musical could have been (and maybe the producers originally wanted it to be) as glamorous, heartbreaking, dramatic, and beautiful as the Hedwig stage production! But for many reasons, it wasn’t :-

I’ve seen the Hedwig movie several times and I love it, I also saw the stage production when the original Hedwig actor, John Cameron Mitchell, came back to do it again (2015, I think?). It was updated with more current references (Grindr or Tinder were mentioned), it was hilarious and angsty and Lestat would have loved to see it, if not be in it! ;D

But I also feel that there are many sensitive topics here. A major one being the gender issues, a very big element in Hedwig, and as I am not well-informed on the subject, I don’t feel that it’s appropriate for me to address it too much, but I’ll open this to anyone in the comments/reblogs on that.

As characters, yes, a lot of parallels can be drawn between Hedwig and Lestat, an essay could be written about that, I’ll open this to anyone in the comments/reblogs on that, too.

TL;DR: As this is a fandom blog for entertainment I’ll just say that Lestat’s an actor at heart and I think the role of Hedwig would be a challenge he’d love to tackle, for all the sensitive topics and for how much he would

Sooo many good quotes that I think Lestat would find relatable:

I think the Origin of Love song works for both of them, too…

New Loustat playlist for anyone experiencing feels for these sad sad drama queens. I put a /slight/ degree of effort into the track order, so if you can, listen off-shuffle…themes and feel should maybe kind of follow the story of IWTV if you listen real careful that way~~~Enjoy!

Lestat is ahead of his time, on Trend: Mixing Prints

Not at all! Pattern mixing was fairly common around the end of the 18th century.

^Update! #the more you know.