Lestat: You Give Love A Bad Name // Bon Jovi

Lestat and Armand in a karaoke battle.

New Loustat playlist for anyone experiencing feels for these sad sad drama queens. I put a /slight/ degree of effort into the track order, so if you can, listen off-shuffle…themes and feel should maybe kind of follow the story of IWTV if you listen real careful that way~~~Enjoy!

not to get mad nerdy but I just discovered tabletopaudio.com and I’m fuckin losing it

this person (people?) goes about making 10 minute long loopable ambient noise tracks for every imaginable setting (docks, taverns, forests, airships, spaceships, office buildings, sewers, EVERYTHING) and has over a hundred tracks to offer, and on top of that if none of them suit you there’s a huge feature called soundpad where you can mix and match from their set of hundreds of individual sound effects and music clips to make your own ambient background track

I did a little further reading on his about and the guy running this is just a dad with two kids who like playing tabletops with him and he had the composition and musical training to start making soundtracks for his games then decided to spread that to the world for absolutely free, he even welcomes you to use his tracks in your works (podcasts, videos etc) and is open to being hired for custom tracks

THIS IS VERY USEFUL THANK YOU

Glen Hansard – Talking with the Wolves

Moonlight Serenade playing from another room

Not here, and not yet, but it’s the thought that weighs heavily on your minds. It threatens to disrupt the peaceful reprieve you have both managed to seek out from the party. Away from that crowded, smoky dance floor, and out into the gardens, where the evening is cool and fragrant. Everything is muted out here, softer, both sound and sight.

Alone together. One offers a hand, the other takes it, and you begin to dance.

For now, the idea of war is an ocean away. For now, you have the golden streams of light that spill out from the French windows, letting your shadows on the wet cobblestone stretch longer as you sway to a muffled tune.

Neither of you speak. The atmosphere is rich and dense with the delicate swell of instrumentals, the cloying scent of hyacinths, with the weight of words left unsaid. It’s a last dance. It’s a goodbye. But above all, it is a theft. Possibilities, moments in time, the growth of something more, all taken away by forces much larger than either of you.

Your eyes drift closed, and everything fades to the back of your mind except for the person in front of you. Your awareness has narrowed down to a few sensations, cataloguing them in your mind and stashing them away for safe keeping. Hands clasped together, a soft cheek leaning on a wool-clad shoulder, a hushed sigh close to an ear. Hair being brushed back, the sweep of eyelashes over cheekbone, the reassuring warmth of another person.

Chest to chest, heart to heart. You wish that this dance would never end, continue like the constant, never changing cadence of the music. You wish that you could capture this moment in amber, moving neither forwards or backwards, only a gentle sway to a distant song.

But the year is 1942, and there is a war, and soon the music fades to silence.

Lassoed around the heart again
Let me go, let me go
Locked out of the apartment
Taking pictures in the snow 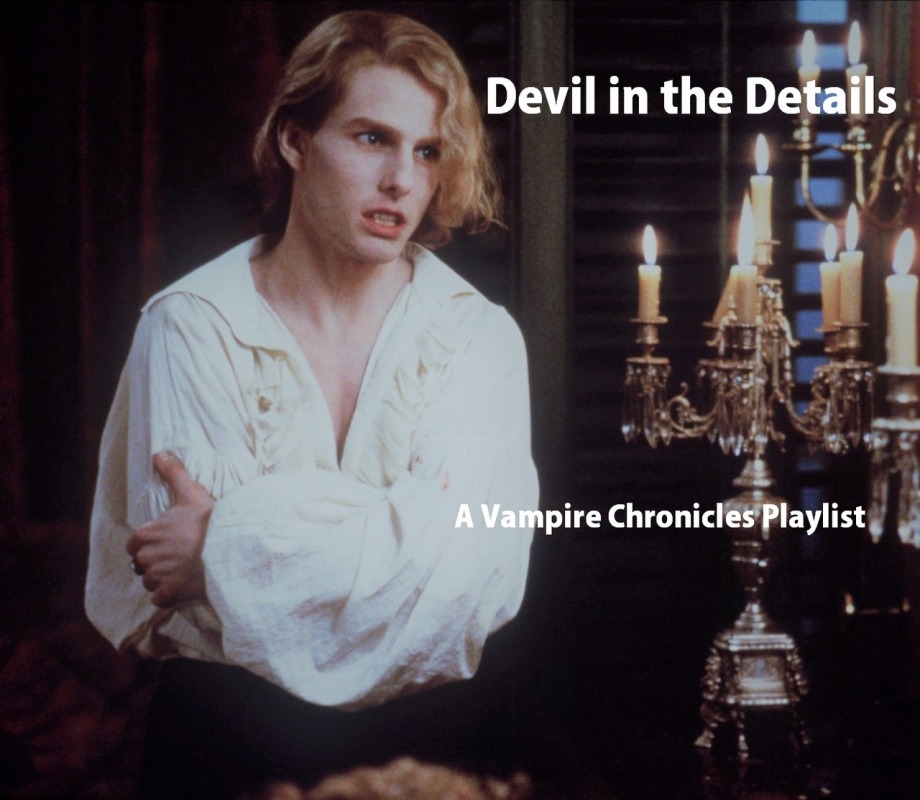 First in my series of Vampire Chronicles playlists.

Not a bother at all, I’m so sorry this message sat in my inbox so long. *facepalm* Sometimes I hoard the nice messages, more than a little too long.

“Burnadette”? Thank you! It’s not my ACTUAL name, but it’s the name I prefer for my fandom life… I was brought up in a time when the internet was new, and we were taught not to reveal much about yourself for safety concerns, and I still feel that way.

“Burnadette” is based on the song “Bernadette” by the Four Tops. I changed the spelling to include the word “Burn,” which is a Louis reference, his pyromania, back when I chose the name I was still making fun of him for that. This many years later, I don’t do that as much anymore, you might say I burned out on that. pfffft.

It’s a very upbeat song, but if you listen to the lyrics closely the singer is basically a guy who has to have ALL OF this poor lady bc apparently she’s already so much a part of him that he needs her more than just out of love, and smacks down the competition as unworthy. It’s pretty obsessive.

My parents and I loved Motown when I was younger, we’d often sing along to this song in the car, so it has a nostalgic feel for me. At that time, I just thought it was a guy who couldn’t help but express himself as to how madly in love he was. Obsession and madly in love, unhealthy relationships… very VC.

[ music that gives me akasha vibes ]