Honestly shoutout to The Social Network for giving us the line “you’re going to go through life thinking that girls don’t like you because you’re a nerd. And I want you to know, from the bottom of my heart, that that won’t be true. It’ll be because you’re an asshole” because if that doesn’t epitomize women’s feelings for entitled male nerds I don’t know what does

Absolutely agreed.   I first read the first four Vampire Chronicles back in the 90s when I was fourteen and I knew then that the one more likely to lie to the reader, perhaps to protect his own ego, would be Lestat.  As much as I love him he does have an ego and that was a pretty miserable condition he was in.  He admitted he was in that condition yet denied the conversation.  It seems more likely that it did happen than that it didn’t.

Yep, I think it did happen, and Lestat’s ego couldn’t handle it.

imagine reading a book of all the lies you’ve told

I have read a book of all the lies others have told. 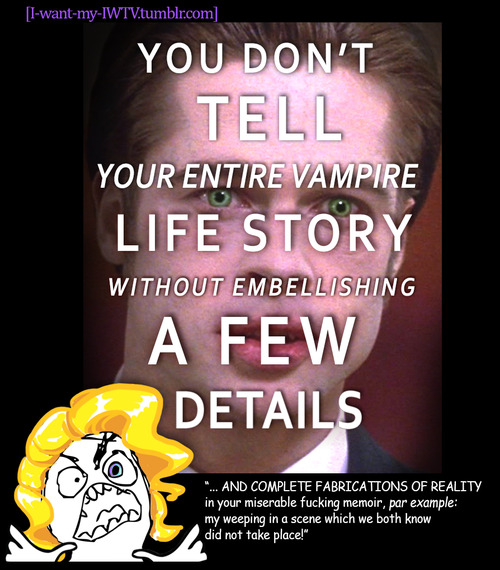 OKAY u all twisted my arm, here’s #4, previously not posted…

Interview with the Vampire: the Social Network poster meme #1