Sadly, I’m not aware that anyone has done fanart of that kiss in Prince Lestat yet. #FANART REQUEST.

We do have other kisses to choose from ♥u♥

Lestat loves kissing but I don’t have enough fanart of him doing it. Check out:

Lestat usually initiates w/ Louis so at the moment of contact, Louis might not appear to be all that into it, bc he’s pleasantly surprised! He gets into it quickly though ;D

“I’m getting into the coffin and you will lie down on top of me if you know  what’s good for you.” Now, I’m quoting directly from Louis’ insipid novel in which he provides the barest skeleton of how this scene actually played out. It was really quite romantic on my part, while he on the other hand  was being a prissy baby.

“I can’t help being a gorgeous fiend. It’s just the card I drew.” -Lestat de Lioncourt, The Vampire Lestat

photoshop credit goes to i-want-my-iwtv (please do not remove).

We were in the thick of Summer. The hot, sticky Louisiana air hung stagnant in the air, bringing with it the putrid smells of the swamps and Plantation. Though the suffocating heat did not affect us the way it did mortals, Louis and I were not impervious to it. It made me antsy. I paced about the house restlessly, picking up objects to examine them, only to put them down immediately. Louis was in the parlour, hunched over a letter he was composing to one of his fellow bourgeois, slave-driving compatriots. He was thrumming his fingers on the tabletop as he worked. Now granted, it was a very small thing and in retrospect shouldn’t have been enough to start an argument as big as it did, but he had been doing it non-stop for hours. HOURS! It was driving me crazy.

I tried my best to ignore it.

But I could only take so much.

“Mon dieu, Louis! What, are you committing your entire life’s story onto paper?!” I snarled, sticking just my head over the threshold of the parlor. Louis turned in his seat, arm draped languidly over the back of it, to give me an innocently confused look.

“Is something the matter?” He asked, eyebrows furrowed.

“Yes, yes, I’ll say something’s the matter. Stop it with that infernal racket you’re making with your fingers it’s driving me up the wall! Besides such mortal fidgeting isn’t suitable for a vampire.” I turned sharply on my heels. “Come Louis!” I called from the next room over. “Come hunt with me, I’m feeling rather peckish and heaven knows how much you need to get out of the house.” I went to fetch some appropriate attire for public audience. I returned to find him back to work on his letter still doing that thing with his fingers. Just to spite me this time, I was sure of it.

“Oh, I heard you,” came his response without even looking up from his paper. I leant against the doorframe, arms crossed.

“And what if I don’t wish to hunt with you?” he asked coldly.

“Louis, stop being foolish. Put the pen down and- for godsakes STOP IT WITH YOUR FINGERS!”

Louis stopped and shot upright, knocking over his chair.

“And why should I, Lestat?’ he hissed scathingly. “Why should I hunt with you? And I can make whatever sounds I please. You don’t own me.”

I snorted. “Fine, fine. Don’t come with me, then. Go out and hunt your rats in perfect solitude. I don’t care.” Now here’s the thing: when things get started like this between Louis and I, neither of us can just let it go. We can’t just throw in the towel and let the other alone. One of us always has to come back for one last, well-placed metaphorical kick. “Your hunting habits disgust me, by the way. Have I mentioned it before? Simply vile.” And that was my kick.

“It’s my choice, Lestat. A moral choice. We all have to make one. Would you rather me act like you? Zero regard for life?” And…that was his. His voice was shaking with anger.

I wasn’t expecting Louis to charge me. Such an overt display of anger was rare for him. I easily evaded the punches he threw at me. Christ…what’s with him tonight? “I- hate- you-you monster” he grunted in between jabs. I grew tired of this and grabbed a hold of both his wrists. Furiously, he thrashed and managed to land a kick to my stomach. I growled and twisted his arms behind his back so that we were chest-to-chest.

“What on God’s green Earth has gotten into you?” I spat. He glowered at me with piercing green eyes.

“I hate you.” And to that end, he did the single most unexpected thing I could possibly think of anyone doing after having uttered that phrase: he smashed his lips against mine, capturing me in an overwhelmingly passionate kiss. Was this happening? Kissing him…it was something I’d wanted since I first saw him. Something erupted in me. Something between us had just reached a breaking point and this was the result. I closed my eyes. I felt something very akin to mortal passion as I melted into the kiss, our lips moved together seamlessly, hungrily. After a few heated moments that felt more like hours I broke away from him.

Don’t sit back and let things happen to you. Go out and happen to things. 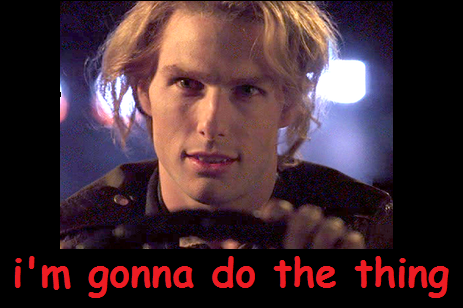 I am blown away.

They made me look like Glenn Close in Fatal Attraction.

“What would Christ need have done to make me follow him like Matthew or Peter? Dress well, to begin with. And have a luxurious head of pampered yellow hair.” – Louis de Pointe du Lac, Interview with the Vampire

As a mortal you catch glimpses of infinity: the vast expanse of outer space when you look up into the night sky, mathematical equations that never come clean and never repeat, black holes, perfect circles, figure eights. These are all abstract concepts, however. They are  far removed from you and easy to put in the back of your mind as they carry no relevance. It keeps you from going mad.

It is not so simple for an immortal, as the only truly relevant thing is infinity and yet it is still incomprehensible. Inescapable. There is no brushing it off when you look at a face and see an entire universe hidden in just the eyes alone.  Imagine then, looking into the sky and seeing the same. You see yourself reflected everywhere  and you think yes, I am this. I am the infinite made tangible and solid.

It drives many to the brink of insanity.

For myself, even after all this time, I feel nothing but absolute and dazzling  power.

Of the thousands of immortals immolated in the rise of Akasha, Armand was one of the precious few who remained. And why is that do you wonder? There is nothing mysterious to it, in fact it is made quite plain.

As much as we grind on each other, at the very bottom of the bitterness, resentment, and jealousy Armand is a beloved of mine. He is my dark brother whom I have known almost the entirety of my immortality. Life with out him would seem…incomplete.

To answer your question is Armand expendable? Absolutely not.