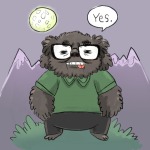 expanding on a comic i made a while ago. I love you, vampire steve buscemi

Ah! It’s mah face! I love this so so much! Looks like a painting from a different era… you can see my lil lateral fangs, shhhh…. I love how they captured my asymmetry in such a beautiful and rich way, infused it with my spirit. I’ve always felt that portraits are a much better representation of one’s face than a selfie, bc the artist makes choices to construct the face of their subject, building it from nothing, like writing a story, whereas cameras (especially on phones with such short depth of field) have no human behind them, no empathy for their subject. A talented photographer can use a camera to do that, of course, but I digress…

This was a commission I paid the amazingly talented @vaciel for, and now I need to another one from them!! bc reasons. If you have the $, I highly recommend this wonderful artist, they are a pleasure to work with ❤

Maybe I’m an old man but goddamn, these vampires with blood dripping down their chins–that’s your food!! THAT’S YOUR FOOD!! Close!! Your!! Mouth!! You think some asshole slobbering chicken noodle soup or yogurt or clam chowder all down themselves would be sexy??? What makes you any different, you sticky-stained slackjawed screwball??? Close your mouth!! Use a napkin!! And for godssakes stop looking so smug, like, “Oooo, I’m a creature of the night look at what sustains me” yeah uh huh a fucking lack of basic hygiene is what I’m seeing and it is not impressive!! At all!! My nephews are three years old and they drool less than you do!! You’re how many centuries old?!?! ACT LIKE IT

Let’s put problems with spelling, grammar, narrative flow, plot structure, etc. aside and just look at the story and, in particular, the character arc of Bella Swan.

At the beginning of the story, she is moving from Arizona to Washington on her own volition – she has decided to give her mother and her step-father some time and space and to spend some time with her father. At this point in the story, she is, admittedly, a bit of a Mary Sue, but an endearing one. She is sensitive to the needs of others (moves to Alaska for her Mom’s sake, helps her Dad around the house, is understanding and tries to give the benefit of the doubt even when the other students are somewhat cruel to her when she first arrives), clumsy, out-of-sorts, and a little insecure. She’s not a girly-girl or a cheerleader type, doesn’t get caught up in the typical sorts of high school behavior, and in general functions as an independent person.

It’s worth noting that if Tyler’s van had smashed her, she would have (at that point) died as a fairly well-rounded, empathetic individual. We certainly wouldn’t say she died in need of redemption, at any rate. Instead, Edward ‘saves’ her – and this supernatural ‘salvation’ marks the beginning of a journey that ultimately destroys her.

As she gets more entangled with Edward, she becomes less and less independent, more and more selfish. She is accepting of his abusive behavior (stalking her on trips with her friends, removing parts from her car so that she can’t go see Jacob, creeping into her window at night, emotional manipulation) to the point that when he completely abandons her (walking out on the trust and commitment they’ve built together, in spite of having vowed to remain with her no matter what), she is willing to take him back. Edward is clearly entirely morally bankrupt.

Her father, Charlie Swan, is sort of the Jimminy Cricket of the story. His intuition is a proxy for the reader’s intuition, and he’s generally right. He doesn’t like Edward, because he can sense the truth – not that Edward is a vampire, that doesn’t matter in particular – but that Edward is devoid of anything approximating a ‘soul’ (for those strict secularists, you could just say Charlie can see that Edward is a terrible person). Bella is warned by numerous people and events throughout the course of the story that she is actively pursuing her own destruction – but she’s so dependent on Edward and caught up in the idea of the romance that she refuses to see the situation for what it is. Charlie tells her Edward is bad news. Edward tells her that he believes he is damned, and devoid of a soul. He further tells her that making her like him is the most selfish thing he will ever do. Jacob warns her numerous times that Edward is a threat to her life and well-being. She even has examples of other women who have become involved with monsters – Emily Young bears severe and permanent facial disfigurement due to her entanglement with Sam Uley.

Her downward spiral continues when, in New Moon, she turns around and treats her father precisely as Edward has treated her – abandoning him after suffering an obvious and extended severe bout of depression, leaving him to worry that she is dead for several days. She had been emotionally absent for a period of months before that anyhow. Charlie Swan is traumatized by this event, and never quite recovers thereafter. (He is continuously suspicous of nearly everyone Bella interacts with from that point on, worries about her frequently, and seems generally less happy.)

Her refusal to break her codependence with Edward eventually leads them to selfishly endanger Carlisle’s entire clan when the Volturi threaten (and then attempt) to wipe them out for their interaction with her – so she is at this point in the story willing to put lives on both sides of the line (her family and the Cullens) at risk in favor of this abusive relationship. Just like in a real abusive relationship, she is isolated or isolates herself from nearly everyone in her life – for their safety, she believes.

Ultimately, she marries Edward, submitting to mundane domesticity and an abusive relationship – voluntarily giving up her independence in favor of fulfilling Edward’s idea of her appropriate role. Her pregnancy – which in the real world would bind her to the father of her children irrevocably (if only through the legal system or through having to answer the kid’s questions about their paternity) – completely destroys her body. The baby drains her of every resource in her body (she becomes sickly, skeletal, and unhealthy) and ultimately snaps her spine during labor. Her physical destruction tracks with and mirrors her moral and psychological destruction – both are the product of seeds that she allowed Edward to plant inside her through her failure to be independent.

Whatever wakes up in that room, it ain’t Bella.

I’ll refer to the vampire as Bella Cullen, the human as Bella Swan.

Bella Cullen is the most graceful of all the vampires.

Bella Cullen is among the strongest and most warlike of the vampires, standing essentially on her own against a clan that has ruled the world for centuries.

Bella Swan was empathetic to the needs of others before she met Edward.

Bella Cullen pursues two innocent human hikers through a forest, intent on ripping them to pieces to satisfy her bloodlust – and stops only because Edward calls out to her. Not because she perceives murder as wrong. (Breaking Dawn, p.417). She also attempts to kill Jacob and breaks Seth’s shoulder because she didn’t approve of what Jacob nicknamed her daughter (Breaking dawn, p.452). She no longer has morals .

Bella Cullen uses her sex appeal to manipulate innocent people and extract information from them (pp.638 – 461) – she does so in order to get in touch with J. Jenks.

In short, her entire identity – everything that made her who she was – has been erased.

This is powerfully underscored on p. 506, when Charlie Swan (remember, the conscience of the story) sees his own daughter for the first time after her transformation:

“Charlie’s blank expression told me how off my voice was. His eyes zeroed in on me and widened.

He goes through the entire grieving process right there – because at that moment, he recognizes what so many readers don’t – Bella Swan is dead.

The most tragic part of the whole story is that this empty shell of a person – which at this point is nothing more than a frozen echo of Bella, twisted and destroyed as she is by her codependence with Edward, fails to see what has happened to her. She ends the story in denial – empty, annihilated, and having learned nothing.

now who wants to write fanfiction emphasizing this point

Did I just read a Twilight literary analysis that I liked?

What have I become?

This is not a comprehensive list. There are so many vampire movies out there, and I’m still getting through them. This list will be periodically updated as I watch them and am ready to define the exact mood they are in. Many of these movies I have watched multiple times, some of them only once. Some movies I have seen and are not yet on this list because I need to watch them more times to be able to succinctly describe them.

With that in mind, please start watching vampire movies. I promise you nothing but good things for it.

reblogging because i posted this at halloween time (5am)