Reblogging this version, because giving people credit is good! @violentdelvghts 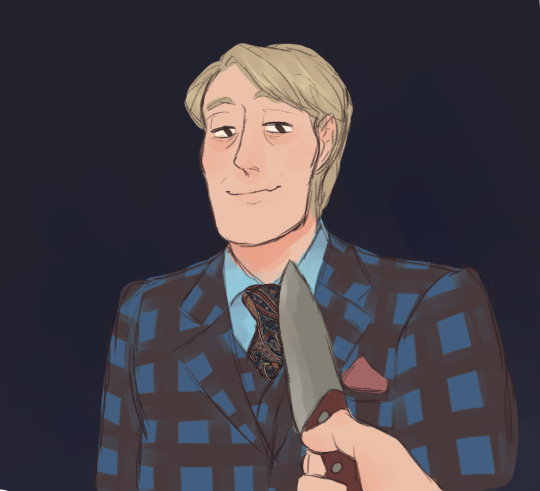 i was just kinda toying around with facial expressions and then suddenly noticed that one of them looked like that cat at knifepoint meme??? and i mean what’s more hannibal than loving the fact that you’re being threatened with a blade

~Support me on Patreon~

A patron requested Hannigram/Legend 🙂 Also submitting this for @hannibalcreative ‘s #lightscameramurder event, but I’m not sure if it qualifies because I put it up privately on my Patreon in December, so you guys don’t have to include it if it’s questionable :))

After being wounded by the surviving unicorn during their first confrontation and nearly dying, Will sets out as the hero to stop Darkness, while secretly struggling with the betrayal and the ugly scarring on his face. When he’s captured, he expects to be executed, but instead, to Will’s surprise, the villain introduces himself as Hannibal, and declares that he can see the darkness in Will, and that they’re a perfect match…

Will resists throughout all of Hannibal’s increasingly more convincing arguments, and then finally, relents… on one condition.

~Support me on Patreon~

Some patrons requested a ballet!AU and a nutcracker!AU around Christmas and so this happened~

Will is a bad tempered and antisocial but extremely talented up and coming dancer who is cast as the Rat King in a high-end short run of the Nutcracker; Hannibal is a well established and skilled dancer who agrees to take the role of Nutcracker Prince for charity despite having little respect for and interest in the production… until he sees Will dance, of course~

I don’t know anything about ballet and I had to look at lots of specific reference to draw this and it’s still not accurate lol, forgive me~~

Support me on Patreon! => Reapersun@Patreon

My headcanon is that Hannibal is one of those vampires that was turned when he was real scraggly so he has to shave and cut his hair every night because it grows back really fast and he hates it until Will happens and Will loves scraggly Hannibal :33