Sadly, I’m not aware that anyone has done fanart of that kiss in Prince Lestat yet. #FANART REQUEST.

We do have other kisses to choose from ♥u♥

Lestat loves kissing but I don’t have enough fanart of him doing it. Check out:

Lestat usually initiates w/ Louis so at the moment of contact, Louis might not appear to be all that into it, bc he’s pleasantly surprised! He gets into it quickly though ;D

Yes, and I have already detailed this in my memoir The Vampire Lestat. It was in the the days following the wolf hunt when I returned home feet-dragging  like a  jaded warrior, eyes haunted by ghosts of the battlefield. Gabrielle came to me as I  lay curled in my room, still wearing the clothes of that blood-soaked day. She whispered her understanding, likening my fight with the wolves to childbirth. We’d both been to a special circle of hell, and we had both done it alone. There could be no greater cognizance  between us than in that moment.

Of course, this was the same time she told me she was to die and  my heart cried a love for her as it never had.

“I’m getting into the coffin and you will lie down on top of me if you know  what’s good for you.” Now, I’m quoting directly from Louis’ insipid novel in which he provides the barest skeleton of how this scene actually played out. It was really quite romantic on my part, while he on the other hand  was being a prissy baby.

For the next five questions my muse can not tell a lie.

What if it was all three put together, hm?  -long, heavy sigh-

I took you because the very first time I caught sight of you my heart stopped, I swear it did. The emerald of your eyes held me enthralled, the depth of your despair penetrated something vital and the damage was irreversible. You may not know this, but I followed you for nights before I finally approached  you and in that time I could look upon no other.  I  became obsessed with the idea of having you, of possessing you. Still, I could not yet tell what precisely I wanted from you. Would I suck your soul down into that sweet oblivion, or would I pluck you from mortality to be forever by my side?

Even as my fangs sunk into the delectable  yielding flesh of your mortal throat,  I still did not know.  Sure, I had made up my mind to make you mine, but could I follow through with it? You were so succulent, your mind so tantalizing that  I  briefly fantasized about killing you, but the thought of it was unbearable. I needed to have you. Alive. Immortal. My lover.

So you ask why? It could not possibly be that I was irretrievably in love with you. 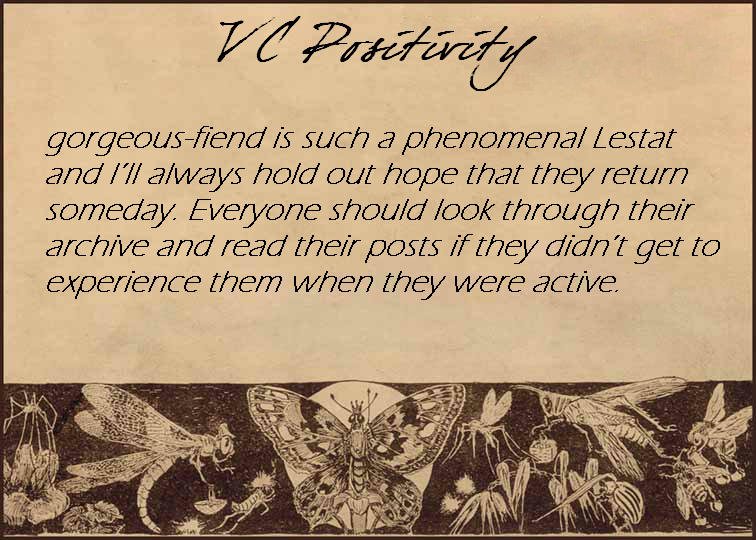 “gorgeous-fiend is such a phenomenal Lestat and I’ll always hold out hope that they return someday. Everyone should look through their archive and read their posts if they didn’t get to experience them when they were active.”

We were in the thick of Summer. The hot, sticky Louisiana air hung stagnant in the air, bringing with it the putrid smells of the swamps and Plantation. Though the suffocating heat did not affect us the way it did mortals, Louis and I were not impervious to it. It made me antsy. I paced about the house restlessly, picking up objects to examine them, only to put them down immediately. Louis was in the parlour, hunched over a letter he was composing to one of his fellow bourgeois, slave-driving compatriots. He was thrumming his fingers on the tabletop as he worked. Now granted, it was a very small thing and in retrospect shouldn’t have been enough to start an argument as big as it did, but he had been doing it non-stop for hours. HOURS! It was driving me crazy.

I tried my best to ignore it.

He’d fallen asleep while they’d been watching a film—sprawled across the divan, his head in her lap, one leg throw half off the piece of furniture. Like any parent, when he slept she could see the face of babyhood still somewhere in the man he was now, her heart aching just a little as she stroked his hair absently. No, she would never deliver such affection were he awake—it cost her too much to do so—but in the safety of slumber she might treat him as she would have in the smallness of mortal babyhood.

She leaned over his face, gently pressing her lips to the tip of his nose. She loved him—unconditionally, irrevocably—this much would always be true.

There is, however, one memory I call to mind, but I do not know it is real or a fabrication of my own making. Gabrielle was called away for some reason or another, and very suddenly thrust the small bundle of my sister into my arms. I remember nothing except that I sat very still, afraid I might somehow hurt her. I could not have been more than four or five.

Lestat used to like throwing grand parties for the youth of Miami on Night Island. He would do this mostly because the young teenagers, all slouched and willowy, revered him as some sort of god. He reveled in it. They were loud, they were boisterous, and they drove the rest of the coven up the wall. They’d put up with these nights of shameless frivolity only because it kept Lestat out of their hair. One night, however, it became too much.

Lestat hadn’t been satisfied with the parties he was allowed to throw in the various reception halls. Because although the they were splendid, the beauty of the halls had absolutely nothing on the opulence of the “residents’ quarters”. The resident’s quarters, of course, being a term for where the permanent residents of Night Island stayed, namely the vampires.

Now concerning vampires, the rules of Night Island were this: drink discreetly and away from the resort, and never bring mortals into the chambers designated for immortals only. These were precautions that had to be honored with the highest regard. Although at the time Armand was explaining this he had been speaking to the whole coven, his eyes kept wandering accusingly to Lestat as a warning. Don’t you dare, that gaze seemed to say. Don’t you dare bring trouble on this coven like you do to everything else. Lestat had only given him a conniving grin in response.

How could he have been expected to follow such constricting rules? Especially when the residents’ quarters- with their heated marble floors and wicked sound system with the subwoofers and oh-so-many breakable valuables- were just begging to have an irresponsible house party thrown in them? Oh, and he would make those delectable teeangers’ young lives.

Waiting for a night when the whole coven would be out at once was entirely too tedious, if not wildly unlikely. So, he strategically devised ways to get rid of them for the better part of a night. For Marius and Pandora he bought tickets to the new exhibit at the art history museum on artifacts from the Renaissance. To his surprise Louis actually wanted to go as well and bought his own tickets, so he was able to kill two birds with one stone on that one. Khayman was easy. Khayman wasn’t even technically a problem; Lestat was sure Khayman wouldn’t have lifted a finger to put a stop to his plans, but conveniently enough, Khayman had planned to spend the night sailing on the ocean. For Armand, Daniel, and Eric (who, to everyone’s surprise had turned up and stayed for a few weeks) he casually suggested the newest psychological thriller, which he politely offered to pay for. With his coven out of the way he was, as they say, in the clear.

The party ended up having a good turn-out:- some 150 teenagers, nearly all of them underage. The music was cacaphonous, the dancing was wild, the energy was infectious, and the place was an absolute mess. The teens had neglected to remove their shoes so everywhere on the carpet Armand so diligently kept pristine were brown, splotchy footprints. Crumbs, candy wrappers, and stray cigarettes wedged themselves in between cushions of the lavish furniture. Louis’s priceless books from the 19th century were brushed thoughtlessly off their shelves to make room for soda cans and beet bottles. A few invaluable relics might have been accidentally smashed to pieces as well.

Lestat made his way around, chatting up his young guests who couldn’t stop raving about how “bitchin”” and “so fucking sick” the party was. He paid special attention to one skinny boy of eighteen in particular. He was a dark-eyed, misunderstood beauty who liked punk rock and defacing public property. Dylan was his name. As Dylan talked on about the the evils of the “system”, Lestat was leaning in to subtly take “the little drink” when the music suddenly came to an abrupt end. The lights came on and the space was filled the sounds of aggravated teenagers, who shielded their eyes from the offensive brightness.

Lestat snarled, tearing himself away from Dylan. He whipped around, trying to locate the source of the interruption; It didn’t take long. At the far end of the room stood Armand, with a single brow arched, twirling the cord to the stereo slowly about his finger. To every one else he must’ve appeared the perfect visage of languid indifference, but to Lestat it was the face of doom.

“Out,” Armand said quietly, with a strong undercurrent of danger laced in his tone.

“No one likes a killjoy, Armand,” Lestat guffawed.

The auburn’s cherubic mouth twisted in rage.”LESTAT, GET EVERYONE OUT!”

The outburst sent the teens scrambling like a flock of frightened hens. They all booked it out the door in under two minutes- quite impressive for such a sizeable crowd. Lestat and Armand were left alone in the rubble that was the post-houseparty wasteland.

“Museum and movie tickets? You think you had me fooled with those random acts of kindness? Think again.” Armand spoke threateningly slowly, “You are not to do anything like this ever-”