First off, darkfic as an umbrella term encompasses a lot of subjects and ‘dark’ topics, abuse being only one of many. It may be therapeutic for people who’ve endured abuse, but it can also be helpful for people who’ve struggled with other forms of trauma, or with mental illness, or other negative things. Depictions of intense, dark experiences can serve as a catharsis by being a direct analog for one’s own experiences, but they can also function more indirectly as a parallel, or a metaphor. Someone who has not been assaulted, but who has struggled with mental illness, may find a story about an assault victim resonating with them as they can identify with the fear and lack of control. And someone who has never been through a specific traumatic experience, but has a lot of fear of it and cultural anxiety around it, may feel bolstered by stories of characters surviving and recovering from that experience.

So for many people, with many different experiences, there can be a direct, therapeutic/comforting benefit to darkfic.

But darkfic doesn’t need to be therapeutic.

There are, of course, other kinds of benefits. Someone who has never been abused might read a story featuring abuse (and clearly tagged for it) and because of it, identify potential warning signs in a real life relationship down the road and know to get out early before things get worse. Or, they might develop a better understanding of what abuse victims go through and as a result, have more empathy for real-life survivors they encounter.

But it’s also 100% ok to like darkfic purely for entertainment value! It is, after all, fiction.

Dark stories challenge us – and we can really enjoy that challenge. They take us to extremes of emotion and the human experience. They plumb the depths of the human id. Even someone with the most charmed life still lives in a world where bad things happen, and even the sweetest, naive person has the capacity for darkness in them. Darkfic lets all of us explore those in relative safety. It makes us feel, and can thrill and horrify us as much as any thriller or horror movie. It can make us consider our own darkness, and be more aware of it. And it can take us to a place so much worse than our reality, that when we resurface into our mundane lives, there’s a sense of relief; we’ve escaped from our escapism, and our hum-drum lives seem so much better and more manageable by comparison.

Plenty of people create dark content who aren’t abuse survivors. There are books with very dark themes that are written by, edited by, published by, and consumed and made popular by people who have not been abused, but which may prove a lifeline for a survivor – one that might not have existed if the entire genre was limited to only people with lived experience. And by accepting that anyone can produce or consume dark content, we allow survivors the protection of anonymity, by not forcing anyone to disclose and reveal their trauma in order to justify liking a work without being harassed and shamed for it. Creating an exclusive club of heavily-scrutinized creators and readers who have to be ‘this traumatized to ride’ helps no one. Hell, trying to pass moral judgement on anyone by scrutinizing the potential reasons they may have for enjoying certain kinds of fictional reading material, rather than looking at their actions toward real breathing human beings, is utterly inane. Especially when fiction – including, and sometimes especially dark fiction – can be used to expand our horizons beyond our own lived experiences make us more thoughtful, empathetic people on the whole. 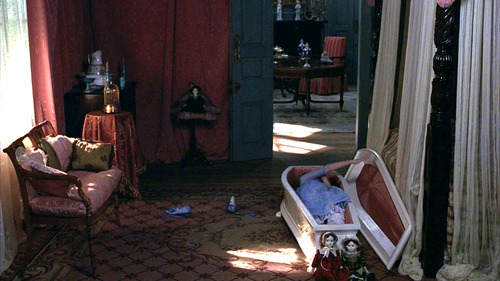 Aww thanx! *u* I love yours, too! Always happy to stalk another VC RP blog.

Yayyy! So happy to find out I’m (hopefully) infecting someone with this addiction. 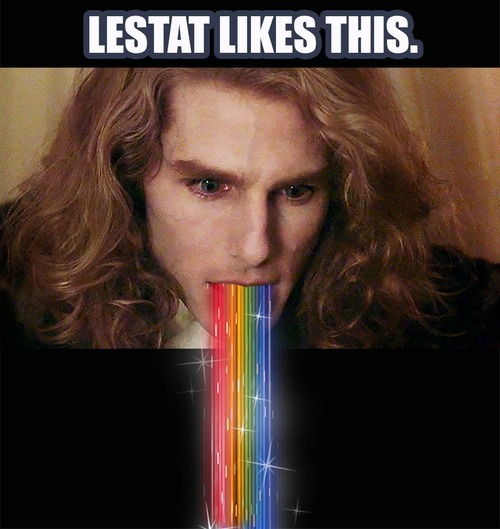 Watch IWTV now, before reading TVL. Let Lestat just be the antagonist that Louis portrays him as, for now.

Madeleine: It’s a strange feeling to be sad for Madeleine, and I am too, bc Louis feels almost nothing for her, even after sharing such an intimate experience with her :,( She has so little time. She probably wouldn’t have survived very long tho, she was mad. She started out a bit mad, and I blame Louis for making her poorly… he’d only seen this done twice, and didn’t take notes, lol… and he was reluctant to do it, didn’t seem to get any pleasure out of it, and that’s supposed to be one of the most exciting/pleasurable acts a vampire can do.

My own theory, formed in part from ideas from cloudsinvenice, is that Claudia tried to make Madeleine into a vampire on her own, numerous times, and that these blood exchanges might have driven Madeleine mad physically and psychologically. Only after suffering from enough of these repeated failures did Claudia have to lower herself by asking/begging Louis to do it.

You’ll see Lestat differently after reading TVL, he’ll be more layered, and then you can watch IWTV again, and notice subtle things Cruise does to call up TVL. After all, Cruise had read IWTV and TVL to prepare for the role. He must have read all the way through ToBT eventually, too, because there was a time when he was connected with the film rights to that book, and was considering reprising the role for it.

Now I’m rambling but whatever…

Allergic to Tom Cruise, hmmm… Well I’m not a Cruiser (hardcore Tom Cruise fans sometimes refer to themselves this way), but there’s always a place in my heart for him purely attached to his performance as Lestat, so that might help get you through your allergic reaction as well. His characters usually have an element of obnoxious good humor about them, at least in the 80’s and 90’s he was particularly excellent at the Asshole-who-learns-how-to-be-a-Decent-Human-Being-and-we-all-Love-Him-At-The-End-Because-Of-This-Transformation. One might think this is who he must be in Real Life since he chooses such similar roles. We don’t know.

If you’re allergic to him bc of who he is a human being, and I know he’s had alot of bad press, had alot of issues with his religious beliefs, and personal life… I think it’s unfair to judge him on those things. He’s a successful actor, obviously, his face alone still sells movie tickets and DVDs, and he’s a professional, often doing most of his own stunts.

I hadn’t cared for Tom Cruise (or Brad Pitt, either) before IWTV, I don’t think I even knew who they were. I liked Jim Carrey, Harrison Ford and David Dochovny at that time… I was pretty out of the loop on celebrity crushes, I think I was 12 when I saw IWTV (on VHS! omg), and I loved both TC and BP in it… It’s become nostalgic for me.

When I see their respective movies now, I still try to watch for little Lestat-esque moments in whatever TC is playing, little Louis-esque moments in BP 🙂 I’m not the only one who grafted some rockstar Lestat onto TC’s Stacee Jaxx from Rock of Ages, since Lestat does become a rockstar in Queen of the Damned. 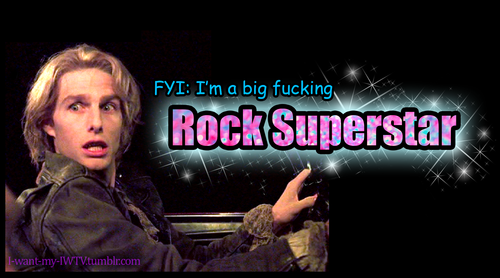 Gosh, I didn’t mean to shoot you down, you made a valid point, it’s just that you also reminded me of all the sadness regarding VC fanfic…siiiigh.

De rien, I’m always happy to provide VC info when I can!

The RPers are quite talented, I enjoy stalking them. Every one of them brings a unique angle, face claim, etc., to their muse; I love having multiple Lestats, Armands, Claudias, etc., to compare and contrast!

There is fanfic out there… if u know where to look…. I share that bc it’s a relatively safe place, since they do defend their writers when possible. Some people here on tumblr also link to fic under cuts.

I hope you’ll understand why I can’t offer more assistance in this regard, Anon, as it’s still a touchy secret in the VC fandom… That Which Must Be Kept.

Send ♕ for a CHILDHOOD headcanon.

ooc; Shortly after coming to America, when he was five years old, he was bit by a Bloodhound, thus prompting a phobia.  He’d been teasing the dog by yanking on its ears.  He was then bit again as a teenager whilst leaving a tavern and has thus never held a large fondness for dogs.

Send ✿ for a HAPPINESS headcanon.

ooc;  Hmmmm, not sure if it would fit into this category, but I think he gets joy out of playful banter with Lestat?  It’s certainly not all vicious arguing, and Louis likes to play hard to get.  It’s his weird way of flirting with Lestat, which Lestat’s generally aware of.  Louis likes to play this game sometimes as well where he’ll purposely ignore Lestat just because he knows it irritates him.

ooc; He really passionately hates it when people try to play him off as the submissive in his relationship with Lestat because it’s really not like that they’re actually both equally dominant but in different ways

Listen, I love to send Anon asks to you RPers!

However: If you really dislike a particular Anon ask, just don’t reply, but don’t hit IGNORE on it or else you’ll block my IP address permanently, and it’s irreversible, and then I won’t be able to send you Anon Asks anymore from this computer 😦

Spread the word, make sure RP ppl know about this.